The Caribbean waters provide an abundance of stunning sea and marine life.  Snorkeling the reefs at Tres Palmas offers us a glimpse into an alternate world comprised of sea turtles, stingrays, nurse sharks and a vast array of tropical fish.  A week ago, we were lucky enough to meet a family of manatees swimming near the Marina.  It’s been 7 years since we have seen so many of these gentle giants and for such an extended period of time here in Rincon!  In Puerto Rico, manatees are mainly found in the east and southern parts of the island.  They prefer areas like Ceiba, Vieques Island, Luquillo, and even Boquerón Bay.  Generally, they are not very common on the north coast, especially not in Rincon.  Regardless of why or how they traveled here, we felt very fortunate to spend the day with these creatures.  They were the perfect paddleboarding companions; I followed them for over an hour in complete awe of their arrival to the west side.  The most amazing part was I was able to swim with them and even get close enough to touch them.  Our good friend Jeremy captured a few beautiful close-up shots of these remarkable sea mammals.  Check out his website, jeremyscheuch.com and patreon.com/underwatervideo, for more incredible underwater videos and photos. 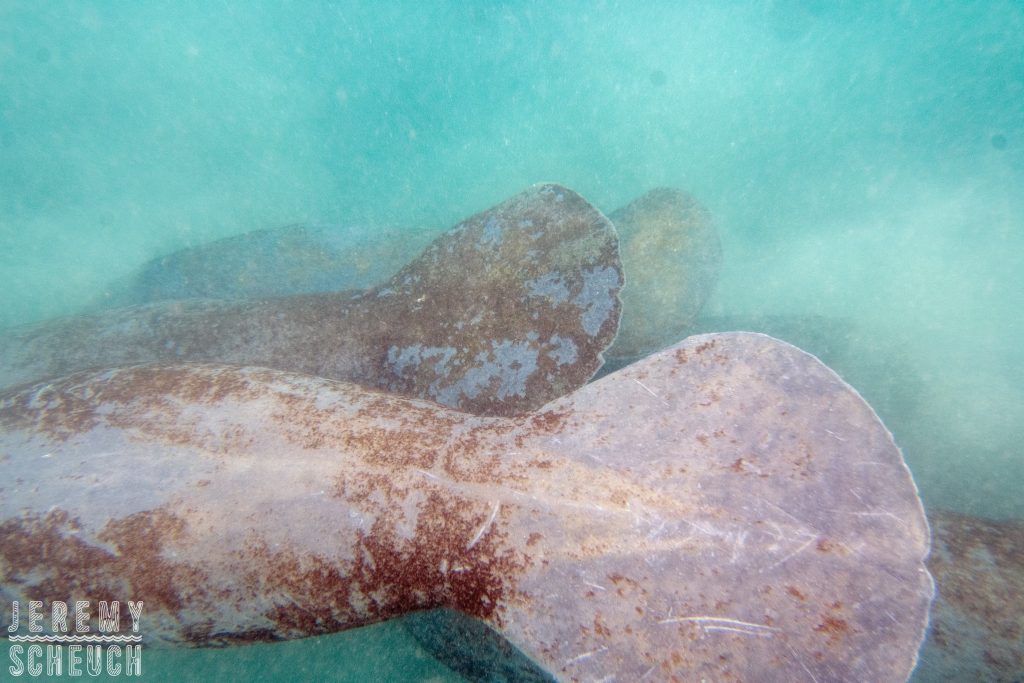 Manatees, also known as “sea cows”, can weigh anywhere between 800-1,200 lbs.  Their faces and heads are wrinkled with small whiskers scattered throughout their body.  They have a flat, paddle-shaped tail and two forelimbs, called flippers. Their closest known relative is the elephant.  Manatees are a migratory species by nature and spend most of their life eating, resting…and traveling.  Sounds like a perfect existence!  They are predominantly herbivores, consuming aquatic plants from both saltwater and freshwater.  Because of their diet, they are generally seen in shallow, slow moving rivers, saltwater bays and coastal areas, where seagrass and vegetation are plentiful.  They need warm water to survive but seek out freshwater for drinking.  They usually come to the surface to breath every 3 to 5 minutes, but if they are resting, they can remain submerged for up to 20 minutes.  Since manatees move slowly, they are susceptible to algae growth on their backs as well as unwanted barnacles.

Manatees have no natural predators but are mainly at risk from humans.  Due to their slow-moving nature, they are unfortunately often involved in boat and jet-ski collisions.  The Caribbean Manatee Conservation Center works in conjunction with the University of Puerto Rico in Bayamon to conduct research, rescues and the rehabilitation of manatees.  Their website provides a multitude of information and tips to help preserve these endangered sea mammals.  Check out the link to their site to learn more.

Personally, I think they are the mermaids of the sea…see you next time!